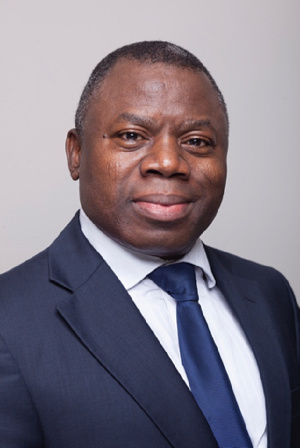 Andani believes the human capital can achieve anything they put their minds to.

What makes him stand out is not that he is the CEO of Stanbic Bank or because he has a good command of the English language. What makes Mr. Alhassan Andani stand out is his people-centered nature and his belief in building the superior capacity of the human being. He says, “I believe the world is full of possibilities. If I look at what I made of my childhood to where I sit today, I think there are lots of possibilities.”

Mr. Andani is optimistic, has a positive demeanor and deeply is contemplative. He attributes his very humane personality to what he describes as the “from rags to riches” story of his life: “I can say my childhood is what has shaped me into who I am today because I can appreciate what happens in the White House and also what happens in the typical village where the landlord does not know what to feed his children on. If that does not shape you, no amount of education can.”

He started primary school in a little village near Tamale called Bamvim and Sanerigu where his father was a chief. He continued to Yohani Middle School and later to Ghana Secondary School in 1973 for his ‘O’ levels, which he completed in 1978. His Sixth Form education was at the Tamale Secondary School.

Like every science student, young Andani set off wanting to be a medical doctor and won himself a scholarship to study Medicine in Eastern Germany but declined and focused his mind on doing Agricultural Economics. No wonder, he had found a role model in his elder brother who had done Agricultural Economics and had a Masters qualification in conometrics. He entered the University of Ghana, graduating with a degree in Agriculture.

He was posted to do his National Service with Social Security bank now SG-SSB and was in the development and finance division from 1984 to 1985. After National Service, he was taken on to work permanently for SG-SSB.

CAREER PROGRESSION
“I completed my National Service in 1985 and then went back to the University of Ghana in 1986, while still working with SG-SSB, to pursue an MBA in Finance.

However, I had to leave the programme because the company transferred me to Bolgatanga to become the Regional Projects Manager from 1987 to 1990. That was my first managerial job. I came back to Accra to the SG-SSB head office as the Senior Credit Officer and a Secretary to the General Loans Committee. I was in this position for a year before leaving to do a Master’s programmed in Banking and Finance in Italy, between 1991 and 1992. When I came back to Ghana, I stayed briey in SG-SSB for six months before leaving in 1993 to join Standard Chartered Bank (SCB) as a Corporate Business Manager, then to the Credit Division before moving from Accra to Kumasi as a RelationshipManager. I was in Kumasi from 1993 to 1995 and was then transferred again to become the Regional Manager for Standard Chartered Bank’s corporate banking activities in Accra and Tema. This gave me the opportunity to build a very solid franchise for SCB in the public sector. I stayed in SCB from 1993 to 2000 before moving to Barclays, where I was the Executive Director for Corporate Banking. I was subsequently appointed the Deputy Managing Director in 2004 while still running the Corporate Banking portfolio. Afterwards, I was transferred to South Africa as the Director in charge of non-presence countries, basically looking after Barclays’ activities in countries where Barclays did not have a presence. I was based in Johannesburg and I looked after investment activities in countries like Angola, Ethiopia, Senegal, Mozambique and Nigeria. I did this till Standard Bank Global Services spotted me in South Africa and engaged me. I was seconded to Ghana as the
Managing Director of Stanbic Bank in April 2006 and that has been my position to date.

In between these, I have had several training programmes in banking. I have been to INSEAD, one of the top MBA schools in the world to do International Management. I have also attended several banking courses.

To tell the story of Stanbic Ghana is to tell the story of Standard Bank Africa. Stanbic is 150 years in Africa and through all the diffcult years, Standard Bank has survived. Standard Bank Ghana is a subsidiary of a very proud, well established African bank that truly knows Africa. We draw so much pride, strength, capabilities and skills from the parent bank. Stanbic Ghana is a global bank with deep local experience and connections: We understand the Ghanaian market and we know the laws and what it takes to run a bank. Banking is all about people and institutions. We try to anticipate their changing needs so we can meet them. The question you ask yourself is; do I have good networks that are able to present
solutions to these institutions?

Stanbic Bank meets these needs with two main business units; Personal Business Banking, which looks after the individual, small businesses and medium sized enterprises and Corporate and Institutional Banking, which looks after all the complexities of government and large multinationals and global companies. We also provide investment advisory services, structured indicators, lending and also attend to the needs of large domestic
companies. Aside these, Stanbic Bank has three other subsidiaries; Standard Bank Investment Management Services, a Brokerage arm which is supposed to tag along with the investment services and a Custodial or International Investor Services. Recently, Stanbic has also introduced Bank Assurance which is part of our personal banking services. I must say that our experience in Africa gives us an edge over our competitors.

Stanbic Bank is a very meritocratic organization where top performers are rewarded and celebrated. We provide the needed facilitation for people to become top performers. Our core values are also centered on the human person; serving our customers, growing our people, delivering to our shareholders, being proactive, teamwork, respect, upholding the highest standards of integrity, community responsibility and the confidence to achieving ambitious goals.

As a company, we do not just measure the “what” but also the “how.” As much as you are the top performer, we also want you to be an exemplar of the values the organization espouses. As a leader, my management style is visionary. The vision is transformational and also inclusive. I spell it out in the following steps;

Set out a vision that is challenging and meaningful; sell the vision in a very implementable framework so that roles are clearly defined; have a way to measure what people are doing toward that big objective; reward people when the measurements that have been set are met or exceeded; hold people accountable when they fail to achieve what they have willingly signed on to achieve; give them training where they have to be trained; replace them where they are not in the right books and keep the realistic picture in front of people all the time, because people love to know how well they are doing.

To achieve this does not come easy because to be a successful CEO, every single person
within your organization must be successful, and that is a challenge. You should be interested in and have your eye on the ball for all the different levels of achievers, the high performers, average performers and low performers.

IDENTIFYING TRAINING NEEDS
I believe banking is not cut and dried in the classroom but a vocation you develop every
day. We therefore train our staff in three levels: The basic training required for the employee to function properly in a unit; a skills gap analysis, from soft skills, management, supervisory to core competency and the third is training on emerging trends.

MY EXTRA CURRICULAR ACTIVITIES
I am the Chairman of SADA’s Board of Directors. SADA is a law by government with the objective to bring about the accelerated development of the northern savanna ecological zone. As the chairman of the board, I sit at the top end of the policy of the organization. I therefore have to make sure that the laws and responsibilities of the organization are framed up in such a way that management can implement them, they can be measured and that the people of Ghana who are putting their money into the SADA initiative can be sure that their money, time and effort are well spent.

Also, I love to read. I love the game of Golf but I do not get time to play as much as I would love to, however, I would spend all night following the ATP Tour. I also love football and I am a Board Member of Accra Hearts of Oak. Internationally, I support Arsenal FC.

MY ACHIEVEMENTS
When I joined Stanbic Bank in 2006, we had only two branches. Today, there are 23 branches with 11 more to go this year. Some time ago, we were the number 18 bank, but currently, we are the number 5 out of 28 banks. We have seen employment numbers rise and our contribution to government taxes keeps rising every year. When I got here in 2006, we were about 126 in staff strength but currently we are just a shade under 600. As a bank we have done well for the organization, shareholders and the customers.

OUR CORPORATE SOCIAL RESPONSIBILITY
Stanbic Bank normally focuses on the core issues such as health, education, disability, and social enablement. However, we also bring football- the passion of Africa – to the home of Africans and have been the sponsor a AFCON since 2008.

MY ADVICE
What motivates me is a legacy that reflects my philosophy– We are just fronting for something much bigger than ourselves- so if we can remove illusions, then we would find a reason to live and set out to express that. If I have money, power and fame, they will all be about me and if anything, you do is just about you, it is not lasting. Believe in yourself and do not let anybody tell you anything is impossible. Do not stick to negative counsel. By: Mr. Alhassan Andani

What’s Trending: The New Corporate You

WORKOUT AT WORK – By Maclean Arthur